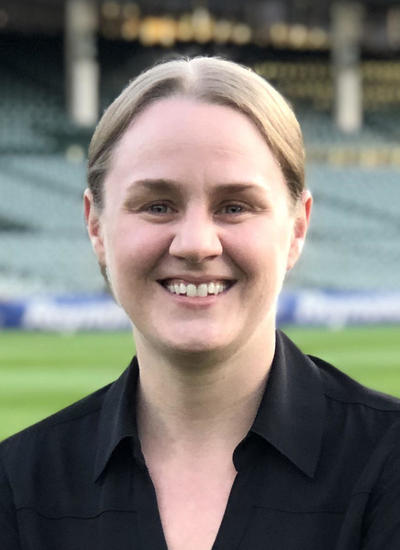 Sigrid Nachtergaele received her undergraduate degree from the University of Chicago and her PhD from Stanford University. During her graduate work in the laboratory of Rajat Rohatgi, she developed novel chemical tools to study Hedgehog signaling, uncovering new modes of sterol-mediated regulation of this critical developmental pathway. She was a postdoctoral fellow with Chuan He at the University of Chicago, where she set out to identify novel chemical modifications in mRNA and uncover their functions. While these modifications are known to influence RNA processing, stability, and function, much less is known about how these modifications are regulated by and influence cell signaling. Her lab at Yale is focused on identifying these mechanisms, with the goal of identifying new modes of RNA-mediated regulation of cell signaling. She was awarded a Damon Runyon Postdoctoral Fellowship and subsequently a Damon Runyon Dale F. Frey Award for Breakthrough Scientists for this work.

Research: The Nachtergaele lab works on numerous aspects of RNA-mediated regulation of cell signaling. Our current focus is on uncovering the regulation and functions of chemical modifications on RNA. While it has been known for decades that many types of RNA carry modifications, their functions have been difficult to uncover, particularly on less abundant RNA species. While recent work has shown that mRNA methylation can influence mRNA processing, stability, and translation throughout development and during cell differentiation, we have only scratched the surface of the biology of these modifications. Moreover, understanding how cell signaling pathways regulate RNA modifications, and in turn how they impact cell signaling, remains challenging. We approach these questions using a broad range of techniques, including biochemistry, high throughput sequencing, microscopy, cell-based assays, and mass spectrometry, while also developing new methods when necessary.