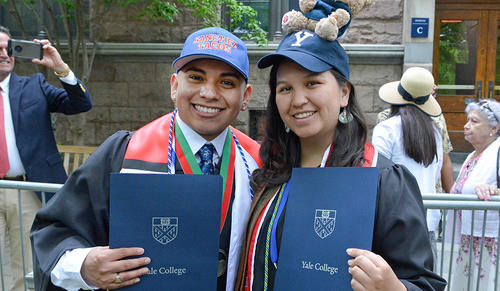 Alanna Pyke of Timothy Dwight College, a Molecular, Cellular, and Developmental Biology major hailing from the Mohawk Nation at Akwesasne, has been described as a “fearless leader” of the Native community known for her “grace, dignity, and strength.” She has served as TD’s big sib coordinator; as a member of the student advisory committee to the Center for the Study of Race, Indigeneity, and Transnational Migration; and as a Peer Liaison for the Native American Cultural Center community. As president and vice president for the Association of Native Americans at Yale, she has devoted herself to supporting Indigenous People’s Day celebrations and the Ivy Native conference on Indigenous Feminisms, re-establishing the ANAAY powwow, and advocating for water protectors at Standing Rock. Next year she will be serving as a Research Scholar in the Graduate School of Arts & Sciences at Harvard as she prepares to apply to doctoral programs.

For her remarkable service and leadership, Yale College is honored to award the Nakanishi Prize to Alanna Pyke.