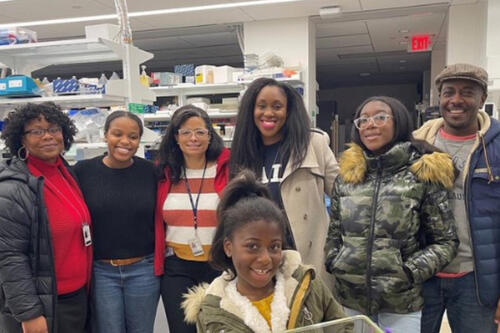 Bobbi Wilson, a fourth-grader from Caldwell, NJ, was killing lanternflies in her neighborhood when a neighbor spotted her and decided to call the police to report “a little Black woman walking and spraying stuff on the sidewalks and trees”.  The event gained national attention and Yale Public Health Professor Ijema Opara decided to make a difference by inviting the young girl to Yale for a Science Tour.

“Bobbi and her family received private tours of labs on campus including The Substances and Sexual Health Lab at Yale, epidemiology of microbial diseases lab and Horsley Lab at Science Hill from faculty, Ph.D. candidates and scientists at Yale — “a crew of Yale aunties.”

A special thank you goes out to Kristyn Carter in the Horsley lab for participating in this visit!